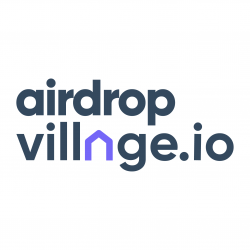 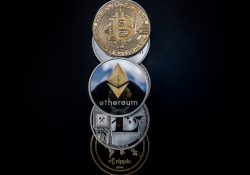 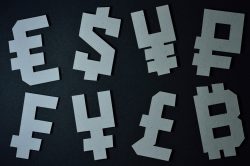 No, not really. Fiat money are strong non-digital currencies, that are used for Exchange with digital currencies (however one may argue, that all currencies are at some point digital, but you know what we mean). The most common fiat money are USD, EUR, or Japanese Yen.
This type of exchange can be a market maker that typically takes the bid-ask spreads as a transaction commission for its service or, as a matching platform, simply charges fees. There is at the moment appearing new trading platform, using its own, brand new currency, that charges no fees, Digitex, about which you can read here. 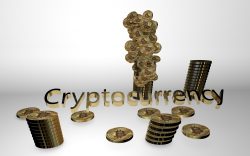 Quite commonly this type of trade operates outside the Western countries to avoid regulation and prosecution. However, they do handle Western fiat currencies (as mentioned above those could be euro, US dollar or Yen) and maintain bank accounts in several countries to facilitate deposits.
The exchange platforms may accept credit cards, wire transfers, and even other forms of payment in exchange for crypto or digital currencies. As of 2019, regulations for crypto industry in developed world remains not settled. Regulators are still considering how to deal with these types of businesses in existence, finding new methods and studies, yet many have not been tested for validity.

The exchanges work in a way that they send cryptocurrency to a user’s personal cryptocurrency wallet. Basically, it is not a place where you store money, but it is a place with information on how much of crypto currency you should have. Furthermore, some can convert digital currency balances into anonymous cards which can be used to withdraw value from ATMs around the world, while other digital currencies are backed by commodities such as gold. 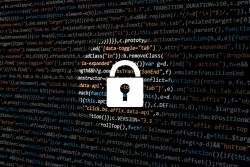 Until 2016, several digital crypto Exchange platforms, operating within the European Union framework, obtained licenses by the EU Payment Services Directive and the EU Electronic Money Directive. Such licenses for operations of cryptocurrency exchanges have not been thoroughly tested, so we can only expect a further adaptation of the system in the future. One such adaptation came out when the European Council and the European Parliament announced that they will issue regulations to impose stricter rules targeting exchange platforms.

In 2018, the US Securities and Exchange Commission stated that “if a platform offers trading of digital assets that are securities and operates as an “exchange,” as defined by the federal securities laws, then the platform must register with the SEC as a national securities exchange or be exempt from registration”. The Commodity Futures Trading Commission now permits for the trading of cryptocurrency derivatives in a public.

In the Asian region, Japan is one of the most welcoming and regulations mandate the need for a special license from the Financial Services Authority, to begin with, operations within the crypto field. China and Korea are fairly negative towards the exchange, as China banned bitcoin miners and froze bank accounts. Australia did not yet announce its regulations on cryptocurrency exchange, but it already requires its citizens to disclose their digital assets for capitals gains tax.

In early 2018, Bloomberg News released a report of the largest cryptocurrency exchanges. This ladder is based on the data of the volume and estimated revenues collected by online analysis page CoinMarketCap. Similar statistics were reported on pages of Statista. There, in a survey by Encrybit, was a point to understand cryptocurrency exchange problems. According to the survey, the top three crypto digital exchanges are Binance, Huobi, and OKEX.

Other data sources point out the problems that cryptocurrency traders experience with related Exchange platforms and the expectation of traders. Among concerns, there are security and high trading fees. Furthermore, the study shows that the exchanges are mostly fairly new and privately held. Several don’t even report basic information, such as the names of the owners, financial data, or the location of the business. A study by Mistertango reported that 88% of Exchange platforms are in favor of regulation for price stability. Here comes the promised list of biggest Exchange platform for cryptocurrencies, and a place they are registered at.
– Binance, MLT
– Upbit, ROK
– Huobi, SIN
– Bittrex, USA
– Bithumb, KOR
– OKEx, MLT
– Bitfinex, HK
– GDAX, USA
– Bitstamp, GBR
– Kraken, USA

What crypto coins to stick around?

During the year of 2017, a large number of investors started dwindling in the cryptocurrency market due to the increment of values within. While experiencing a descent back to its lesser values, the market started losing short-term investors, so-called speculators. Nonetheless, there are still investors who wish to stick around to indulge in an unstable situation to take the chance of using the opportunity. Here we shall have a look at the safest cryptocurrencies that long-term investors should stick with for years to follow.

Ethereum as main blog chain, altogether with its side blockchain activities, including the development of Plasma Protocol, using smart contracts, those are all the aspects that are most likely going to keep this crypto coin a value. Among main items within this system are smart contracts, as opposing to the other cryptocurrencies, Ethereum gives permission to users to automatically send payments when definite conditions are faced. Those aspects, in combination with its professional profile, have a guaranteed future.

Perhaps you have heard the tale before, but it is still worth to mention. The elemental principles of Bitcoin could be considered staying their ground since back from the days when it was reaching approximate valuations of $20,000 a piece. Thus, there are still chances, no matter how slim they may seem, that it could hike back to these levels again. Therefore, if investors would maintain stability, patience, and confidence, rather than the speculative aspects of the market as a whole, they could witness some significant enrichment.

Ripple, the trendy hit of the season, had recently taken the opportunities from the major investors from the financial sector. Furthermore, there are some additional speculations that Coinbase platform plans on adding cryptocurrency Ripple to its list of tradeable coins. This can be a chance for Ripple to be offered with new markets to dominate. Also, this will lead to a greater number of investors who will easily trade it and thus invest in it.

Created on similar patterns as Ripple, Stellar is an outstanding cryptocurrency candidate for you to stick around, that aims to smaller transactions. Build in the same manner, Stellar shall use the same stainless features as Ripple, yet with minor entry barriers for regular users. Nonetheless, there is being discussed also the possibility of the coin being used on regular bases.

Litecoin, as opposed to the Bitcoin, is also considered to be one of the few playing great importance in the sphere of digital currencies. Sadly, this coin has experienced quite some instability recently. With the unexpected movements of Ripple crypto in recent months – which is becoming a big player on the market, Litecoin had its struggles to get and maintain backing from the investors that had been switching their attention to competing Ripple. However, as we already learned from history, those trends tend to stabilize over time, giving Litecoin chance to again prove itself as a worthy coin in the crypto market.

Bearing in mind all of the above, we may have a look at another integral part of cryptocurrency exchanges. The actual Exchange. As already said, there are several options what to trade crypto for. Services, goods, other cryptocurrencies or fiat (the base money, strong currencies as USD, JY or EUR).

And we are going to undergo another simplification. We are going to use a Bitcoin as a crypto currency base for which we are going to trade currencies. The base from where you may deduct other Exchange rates. Furthermore, there are nearly 1700 different crypto currencies, making it nearly impossible to state all exchanges, of all currencies for all currencies. Thereby we shall focus on the most interesting coins, from our point of view (which are the safest options in the section above), and their Exchange for the one fiat and one cryptocurrency. USD and Bitcoin.
The data source for our exchange rates are coming from the source www.bitinfochart.com 27.1.2019.

As the Bitcoin itself, we are using as a comparator, it makes no sense mentioning its price in BTC, as it is always 1BTC/BTC. Yet this currency has a word to say. It began 18.7.2010 at a hard-to-believe price of 0,0726USD/BTC. At this time, and till 15.4.2011 you could buy this coin for less than a dollar. From those days BTC managed to grow to its all-time maximum the last week of 2017 when it reached the market valuation of nearly 20,000 USD/BTC. And that is already a sum.

Sadly, for many a sum to be lost, as it plummeted deep down not long after. After steep hike followed steep descent to approx 7 000 USD/BTC in summer 2018. From that on there were attempts to resurrect the giant, yet without sustainable success. Ever since it been stabilizing itself, with less and less volatility, yet remaining to go the unfavorable path, with a current market valuation of 3586 USD/BTC.

This crypto superstar had a very similar path of rising and fall as Bitcoin, reaching its maximum at the 3,32 USD/XRP, or 0,00021 BTC/XRP if you wish to, at the first week of January 2018. As mentioned above, we perceive this coin as quite perspective, as it attracts a good deal of investor attraction. Furthermore, during last year, since its magnificent fall, it remains steadily, in the range of 1,2USD-0,2 USD/XRP, with a current valuation of 0,31 USD/XRP, or 0,000087 BTC/XRP, and a promise of further stabilization.

Cryptocurrency Exchange, part 2: Where do we trade? »